Ohio Students Create Sensor to Detect Marijuana Use in Drivers 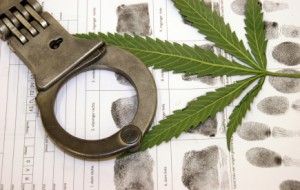 A new device that would allow law enforcement officers to determine if a driver is under the influence of marijuana soon could be developed based on a prototype created by two University of Akron students.

Mariam Crow and Kathleen Stitzlein, graduate students in biomedical engineering, won a $10,000 inventors’ award for developing the sensor that could determine if a person is intoxicated by marijuana within minutes of the test, according to Cleveland.com.

The device, currently called the Cannibuster, uses saliva testing and lab-on-chip technology to determine the concentration of the chemical in the bloodstream. According to the creators, this could essentially provide police with a quick, accurate result.

The students, according to the university, hope to eventually market the small roadside testing device to law enforcement agencies in states where marijuana already has been legalized. Some of these states have set 5 nanograms or less of THC, the active ingredient in marijuana, as the legal limit for drivers.

However, the technology to accurately measure levels of the chemical on the roadside currently does not exist and processing test results could take weeks. Officers rely on the use of Drug Recognition Experts to determine if the driver is impaired, but the level of impairment still could be debated.

Currently officers use several factors to determine if a person could have used drugs, such as blood shot eyes, slurred or nonsensical speech, difficulty standing or walking and delayed reactions. If marijuana use is suspected, officers can ask the driver to submit to a chemical test.

If a test reveals an illegal amount of marijuana in the offender’s system, he or she could be charged with an OVI offense the same way a drunk driver would be. The offense sometimes is referred to as “drugged driving,” and it should be taken seriously.

The potential consequences of a marijuana DUI offense vary depending on the driver’s prior record.  The charge typically is a first-degree misdemeanor for a first offense. This could mean a minimum of 72 hours in jail that can be extended up to 180 days, a fine of up to $1,075 and a mark on the person’s record.

However, the court also could compel the offender to take part in an intervention program in lieu of prison time or in addition to it. These combined times cannot exceed 6 months. If a person is arrested for a second OVI offense — whether intoxicated by alcohol, marijuana or drugs — the penalties could increase.

When a person is convicted of an OVI with marijuana charge, he or she could face consequences in all aspects of life. For instance, a conviction could mean temporarily losing the right to drive, which could affect your ability to work. Additionally, auto insurance rates could increase or a driver could be dropped from his or her policy.

The best way to avoid the hassles of an OVI is to avoid a conviction. These cases often are complex, and proving a driver is over the legal limit of marijuana use can be difficult. An experienced and skilled attorney at Joslyn Law Firm can fight on behalf of you. No matter the situation, they can help you strive to get a favorable outcome in your case.

Call a Columbus DUI defense attorney at Joslyn Law Firm at 614-444-1900. We can work one-on-one with you to ensure your rights are represented and your side of the case is presently eloquently and accurately. We work with clients throughout Central Ohio.

This entry was posted in DUI, Local News and tagged Drugged Driving, Marijuana DUI, Marijuana laws, Marijuana OVI, University of Akron. Bookmark the permalink. Follow any comments here with the RSS feed for this post. Both comments and trackbacks are currently closed.
Contact Us